Week that brought major indices back to the strong support levels that sparked the summer rally.

We believe it can be very important to understand over the next few days whether these levels will resist, leading to a bullish recovery, or whether they will break in favor of further downward pressure.

We are now in an area where the risk/reward ratio favors upside rather than bearish continuation.

DXY and US10 are strongly stretched up and their possible retracement could bring some relief to the markets.

Given the positioning at strong supports and the general extension of internal indicators, we favor a recovery but await price confirmation.

Relatively quiet week for the UK index, especially compared to its peers.

The price appears to be consolidating well above the strong support at 7.150: should this hypothesis prove true, this would be a very positive figure in the short to medium term.

However, the MACD and RSI leave us slightly skeptical about the possibility of a near-term extension as they are both in negative territory.

We draw attention to the strong depreciation of GBP/USD, which had a positive impact on the weekly performance.

Consolidation week for the Italian index, which we believe could come close to strong in either direction in the near term.

MACD and RSI are also fairly neutral as the first is at 0 and the second is at 50.

While we believe that the recovery that

July is very positive in the medium term, we think it’s appropriate to wait for a price confirmation.

Price action from June to date has started a progressive tightening that will lead to a break of the 22,500 level or a drop from 21,500.

For now, we prefer to stay neutral on the FTSEMI and act accordingly on a break of either level. 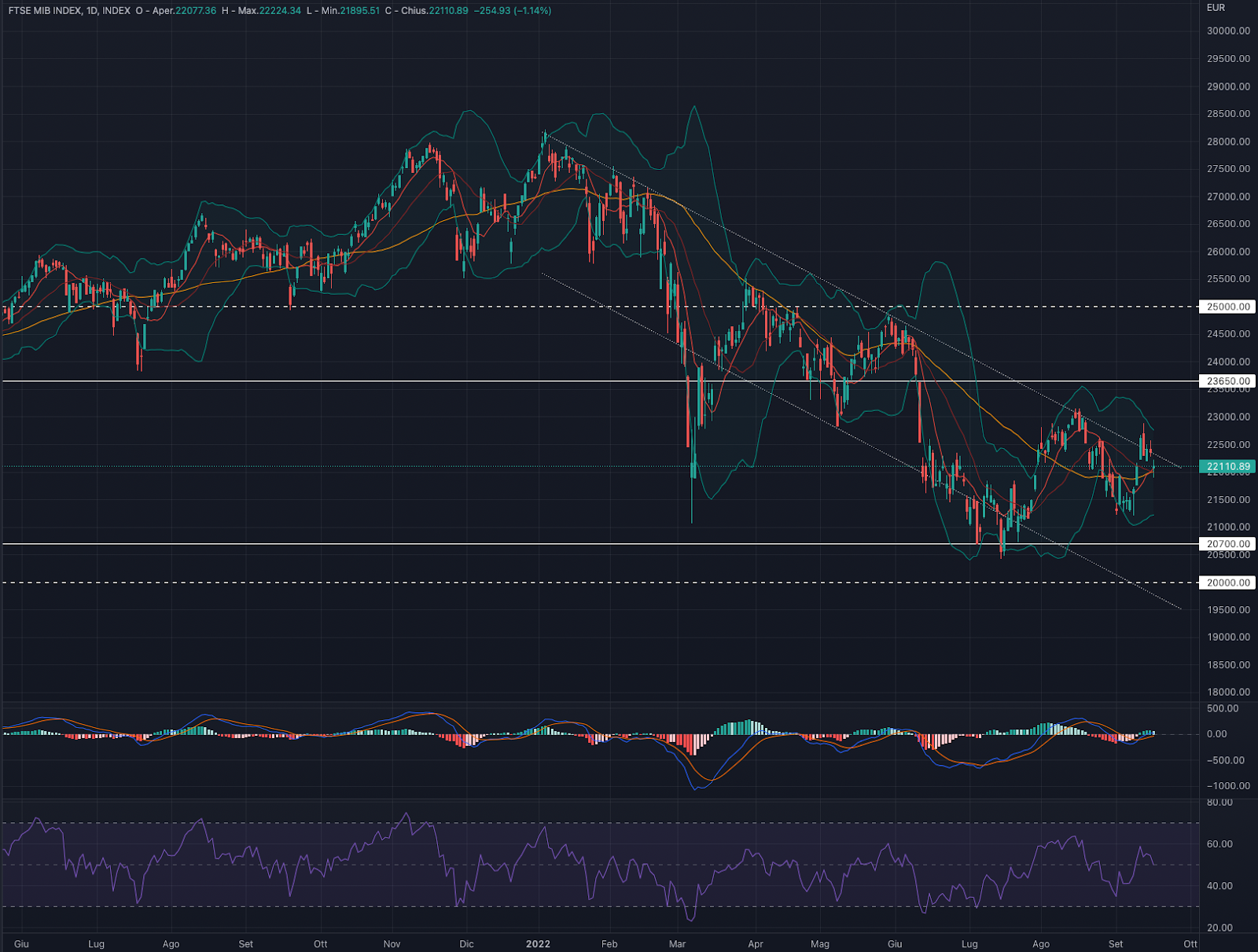 For the week ahead, we suggest a possible recovery to at least 13,100

Week re-observing the strong bearish trendline that started in January 2022.

The price is now near the strong support at 12.600 which we believe will once again play the role of a reversal area.

MACD and RSI are both negative but we can see positive divergence with the price action as it hit the 12.600 support.

We are currently neutral on the DAX and will consider long setups once we break above 13,250 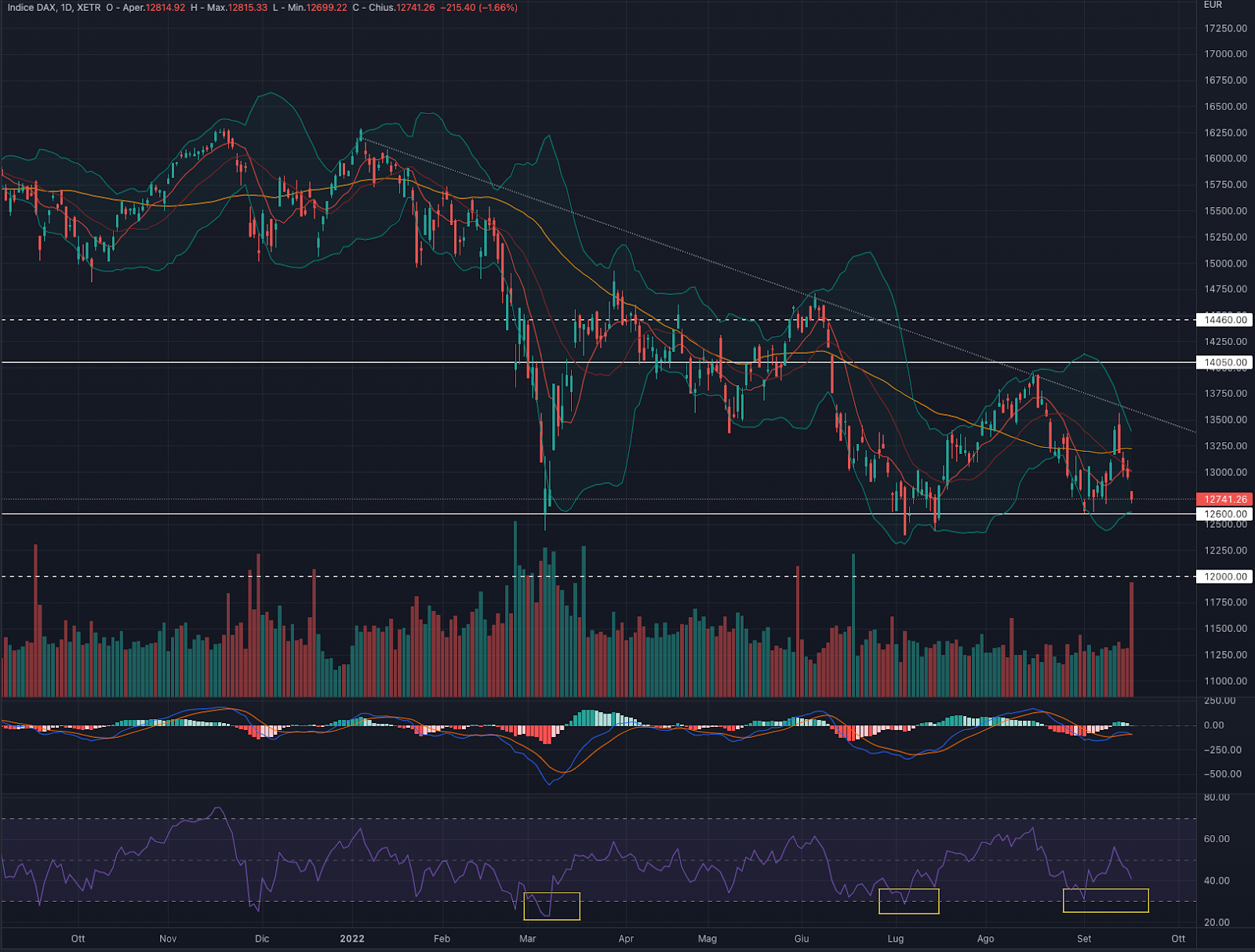 Week the index retested the strong support at 3.830. Given the strong downside extension and approach to the lower end of the Bollinger Band, we believe there could be a rebound in momentum in the short-term.

MACD and RSI perfectly describe the bearish period of the index, with the first below 0 and the second well below the 50 threshold.

In order to understand when the price can start the long-awaited upward movement, we consider it appropriate to rely on the breakdown of bearish trend lines present in the index: we identify the first one from August 16 (short-term) and the second from January 2022 (long period).

For now, we remain neutral on the S&P500 and ready to consider long setups on the break of the short-term bearish trend line, which could see a consolidation above 4,000 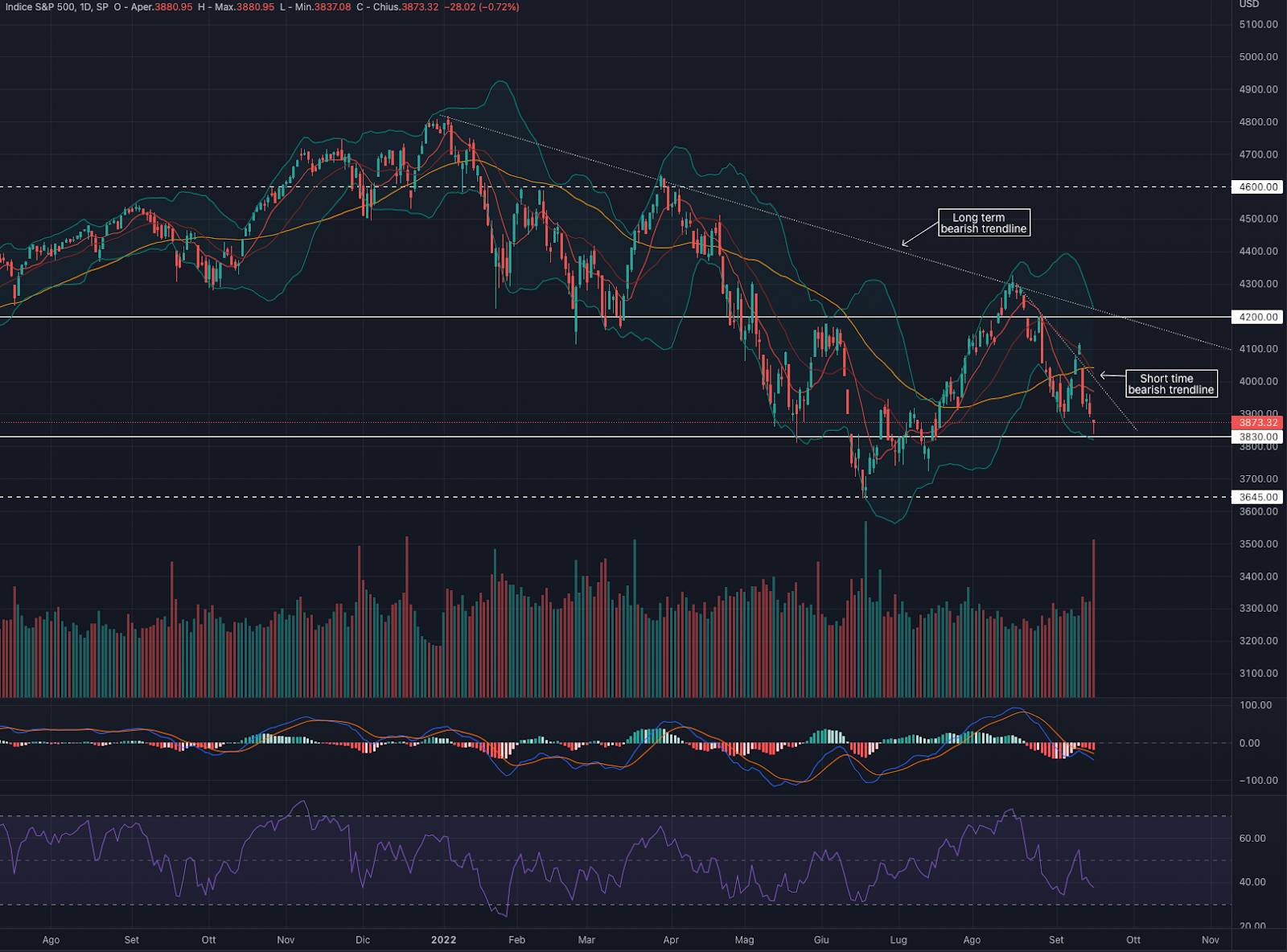 For the week ahead, we suggest a possible recovery to at least 12,200

Week in which the tech index was rejected by the 50-day moving average (yellow line), again confirming the negative period.

Considering the price restarted in May 2022, we can see a significant sideways fluctuation in the NDX: However, coupled with reaching the lower part of the Bollinger Band, we can expect a slight bullish recovery in the near-term.

MACD and RSI confirm the bearish phase as they are both in negative territory: watch if the former stays above the bullish trend line started in May 2022.

We remain neutral on the Nasdaq 100 and emphasize the current situation of uncertainty. It might be worth considering long setups if the price could close above 12,000 by the end of next week. 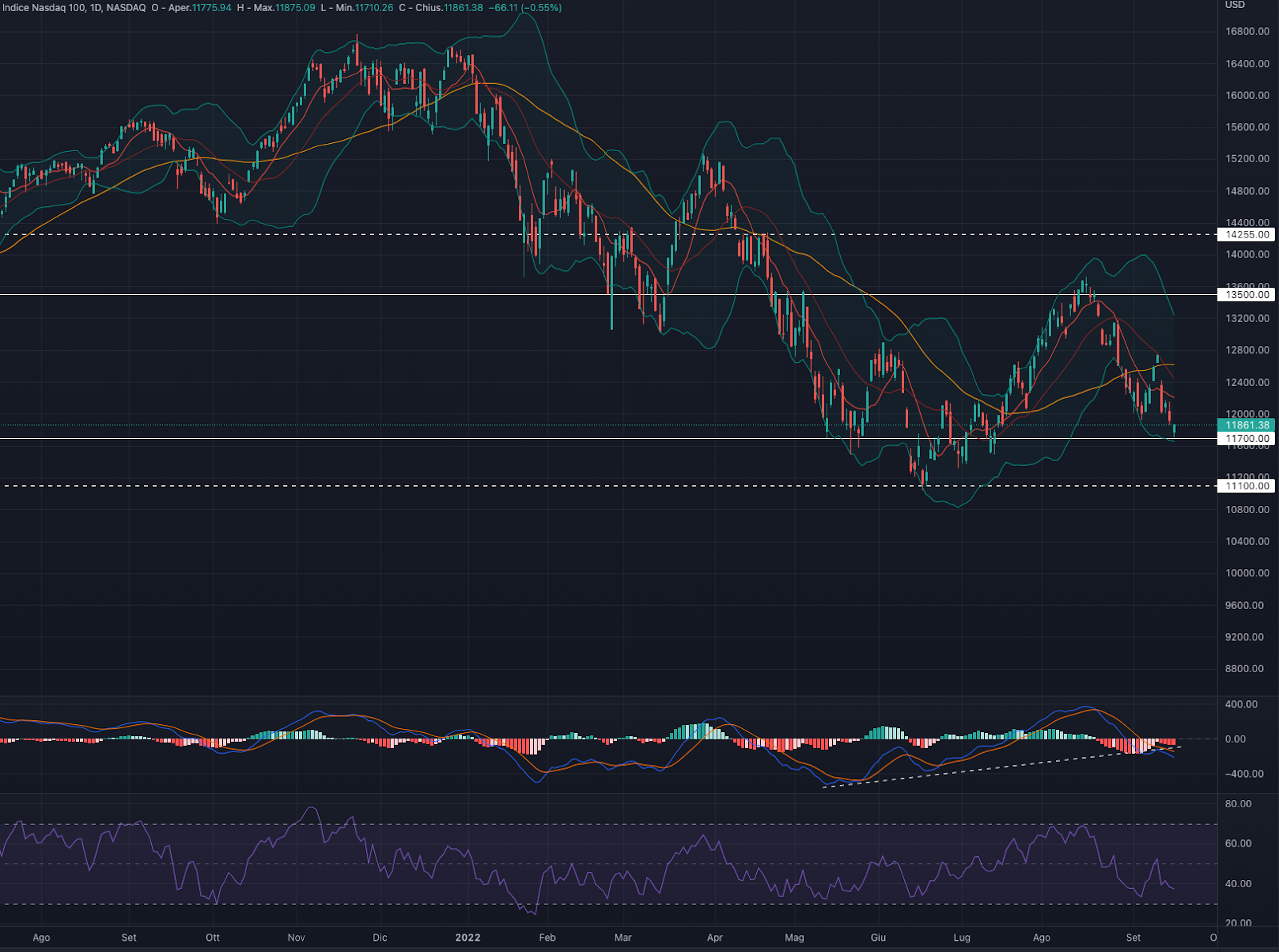 For the coming week, we are suggesting a possible recovery to at least 31,500

Week bringing the US index back to the strong support at 30,600 which has only played the role of an upside reversal area a few times.

Although the trend remains down, it is desirable to expect a rebound in strength in the short-term given simultaneous strong support, lower Bollinger Band levels and a desirable reversal candle on Friday.

The short-term bearish trendline that started in August 2022 confirms that just a break of 31.500 could then lead to a much more pronounced recovery thereafter.

We remain neutral on the Dow Jones and ready to consider long setups once the 31,500 level is crossed. 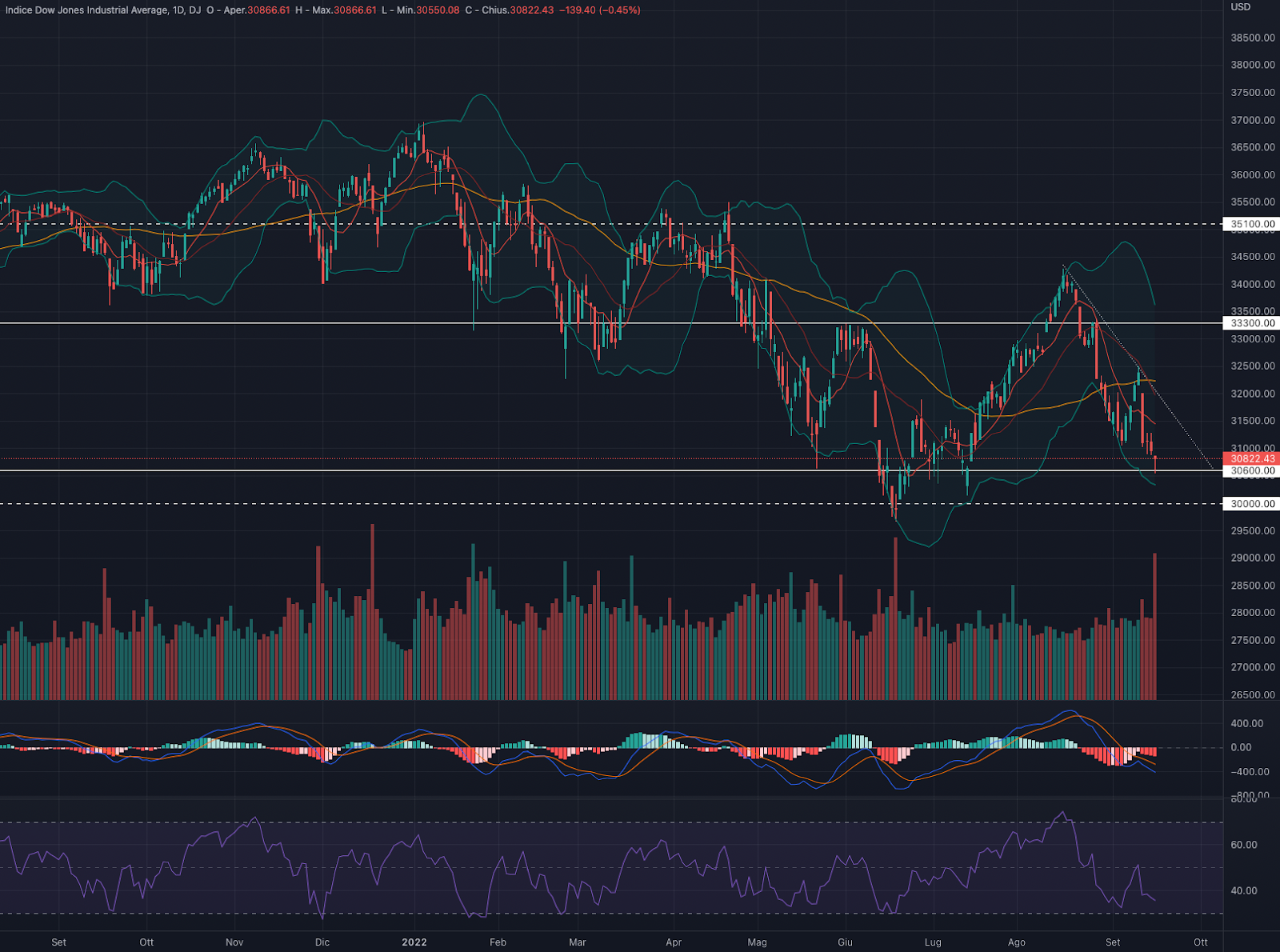 Week of significant consolidation for the Saudi index. The price is close to a strong support at SAR 11,700 and a scenario like June 2022 is possible.

MACD and RSI fully describe the uncertainty scenario, with the former below the 0 level (negative momentum) and the latter still below 50 (bearish).

Looking at the price action so far, the recent drop below the 50-day moving average (yellow line) does not suggest a possible price recovery in the short-term.

For now, we prefer to stay neutral on TADAWUL to understand if the price can consolidate in the 11,500 – 11,700 area: A similar scenario could indeed offer interesting long setups. 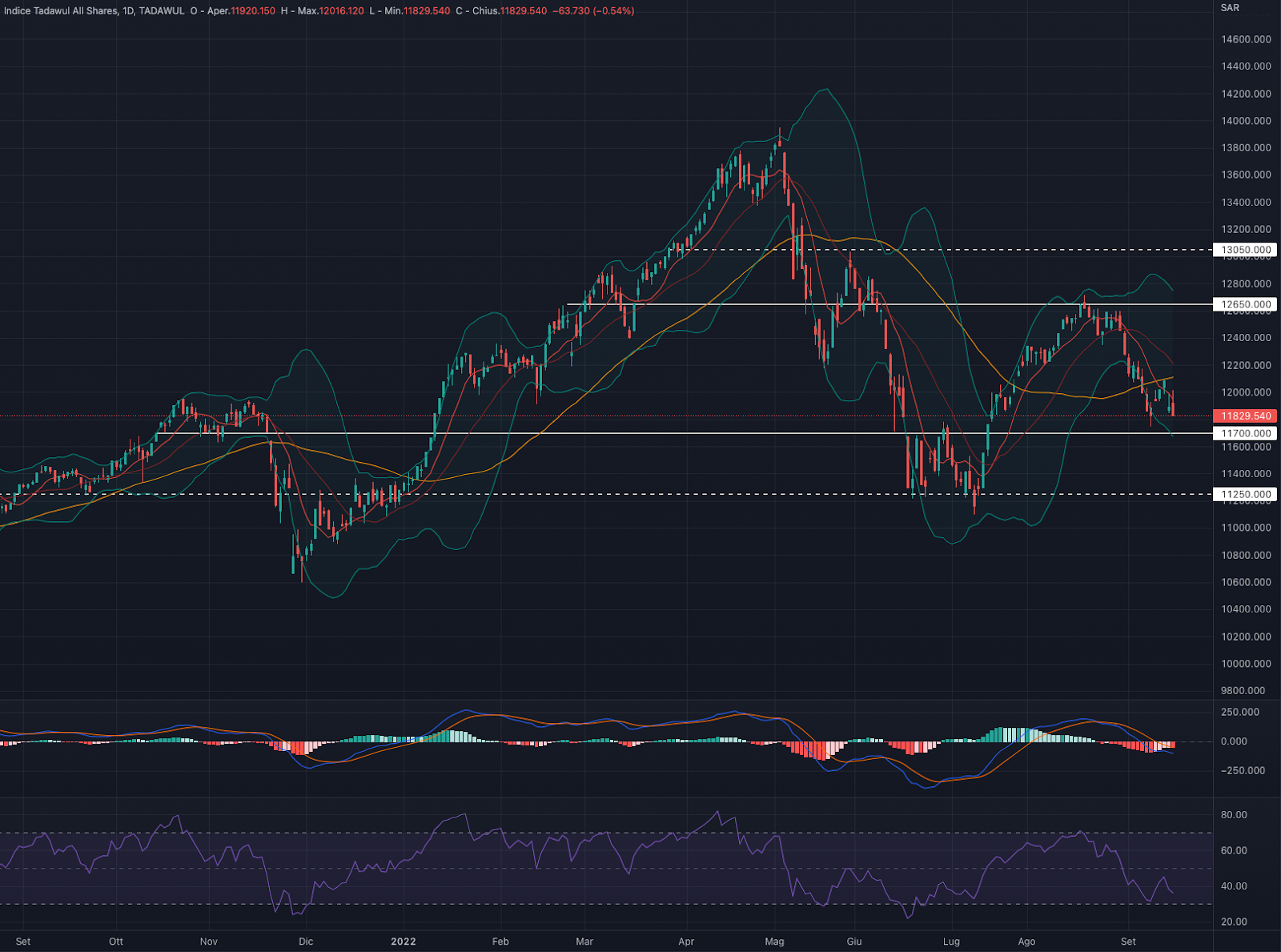 The trend reversal that occurred on September 7th is very positive for a bullish continuation, at the same time we should not rule out a possible retracement after the recent upmoves.

Index value: the first has crossed the 0 line (bullish momentum) and the second is near the 60 level.

The RSI in particular makes us remain cautious on the index and wait for a slight retracement: as in the past, reaching this level has often led to a subsequent decline in price.

For now, we prefer to remain neutral on the FTSE ADX: while pure price action is very positive, we believe that some internal indicators could signal potential short-term weakness. 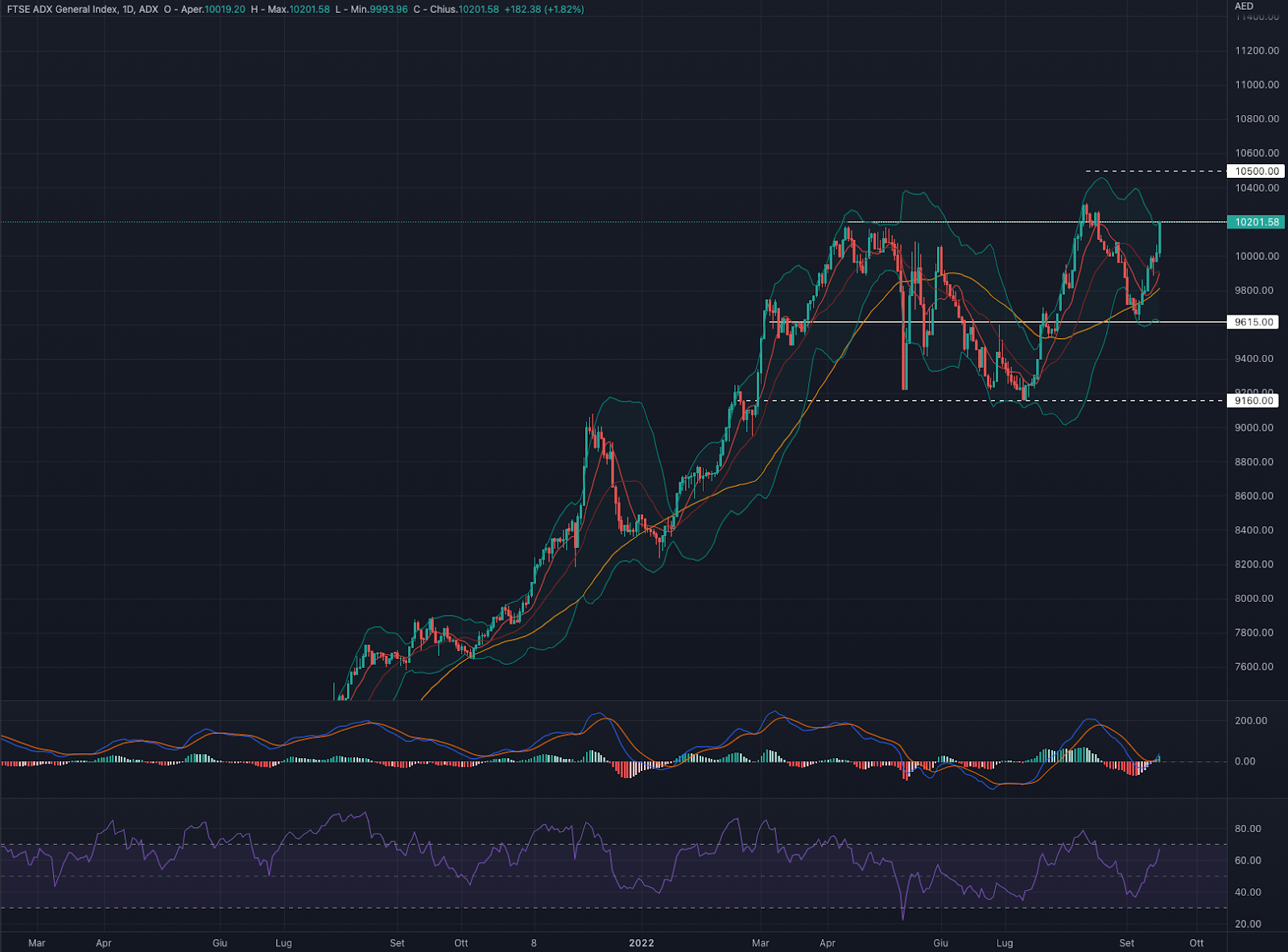 For the coming week, we are proposing a consolidation in the 3,400 area

The fact that the price remains above the 50-day moving average (yellow line) is certainly a very important consideration in the short to medium term.

MACD and RSI are positive but signaling negative divergence with price action from mid-August 2022. If on the one hand we experienced essentially flat price during this period, on the other hand we saw a gradual weakening of the internal indicators.

A weakening which we think could delay an eventual break to the upside above the AED 3,475 resistance level.

For now, we prefer to stay neutral on the DFM: while pure price action is very positive, we believe that some internal indicators could signal possible short-term weakness. 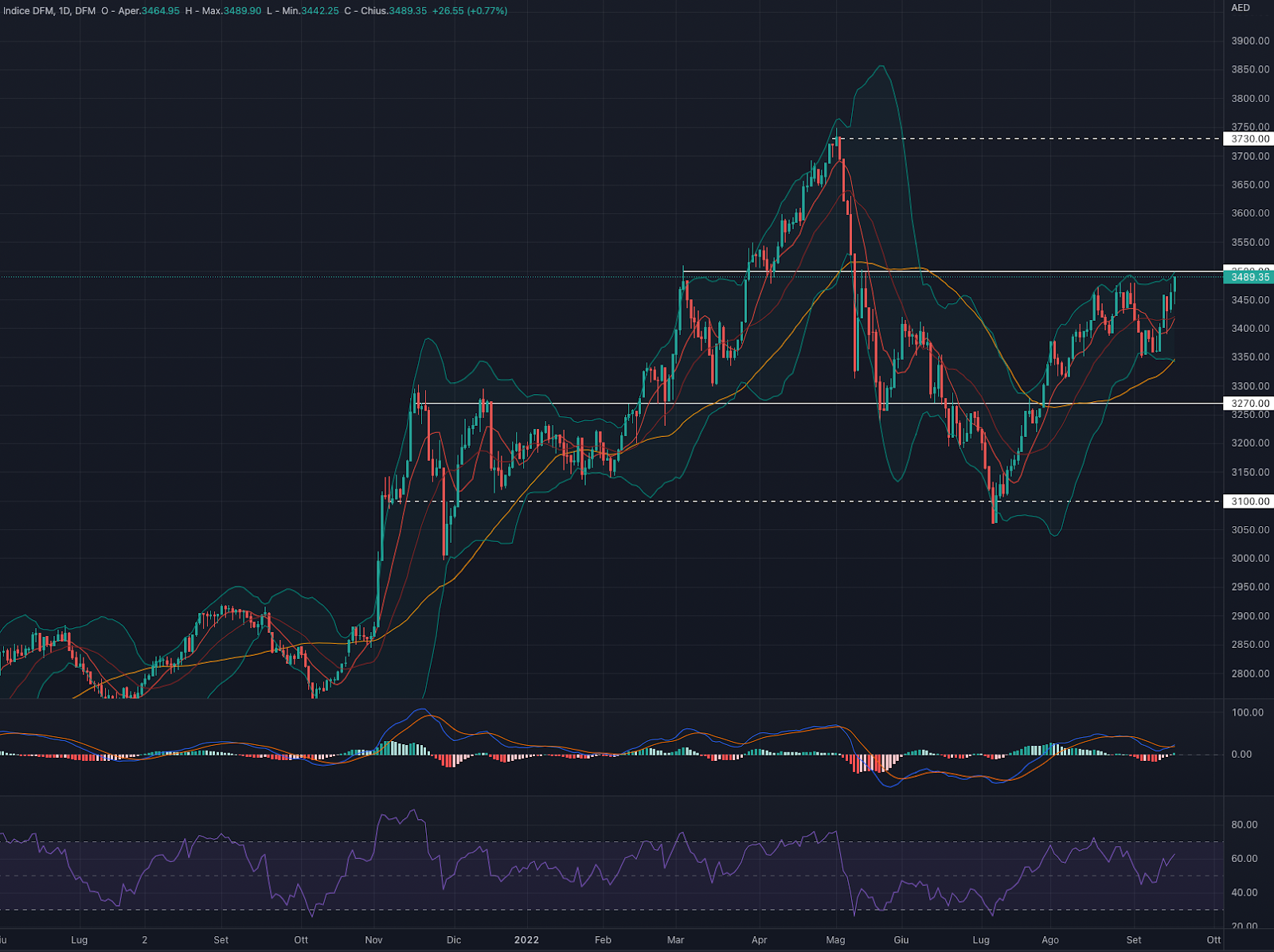