Gold started the new week on a bullish note, climbing to a two-week high near $1,730 on Monday. However, for the remainder of the week, XAU/USD came under severe downward pressure, falling to a fresh multi-year low below $1,660 before staging a recovery ahead of the weekend. Next week’s Fed policy decision will be the key market driver as the technical outlook for gold shows the bearish bias remains intact despite Friday’s gains.

Amid a positive shift in risk sentiment, the greenback struggled to find demand on Monday and the US dollar index opened with a bearish gap. However, during US trading hours, gold gave up some of its daily gains as US Treasury yields gained traction. The 10-year Treasury note auction resulted in a high yield of 3.33%, versus 2.75% in the previous auction, and helped yields rise.

On Tuesday, the US Bureau of Labor Statistics reported that US inflation, as measured by the consumer price index (CPI), fell to 8.3% on an annualized basis in August, from 8.5% in July. This reading was stronger than the market expectation of 8.1%. More importantly, annual core CPI, which excludes volatile food and energy prices, rose to 6.3% from 5.9% in July. With the initial market reaction to hot inflation data, hawkish Fed bets dominated financial markets. The dollar strengthened against its main rivals and the US 10-year Treasury yield climbed to over 3.4%, its highest since mid-June. In turn, XAU/USD was down more than 1% daily on Tuesday.

Although the dollar rally lost steam on Wednesday, gold failed to recover. The only data out of the US showed that the annual producer price index (PPI) fell to 8.7% in August from 9.8% in July. Wall Street’s main indices recovered modestly after Tuesday’s CPI-inspired sell-off, but the 10-year US T-Bond yield managed to hold near 3.4%, preventing XAU/USD from moving higher.

The dollar continued to outperform its rivals despite the sour market sentiment and gold fell below $1,700 on Thursday. After the mixed macro data release from the US, US yields started to rise and XAU/USD broke below the key $1,680 support, triggering a technical sell-off. Gold was down nearly 2% on Thursday, hitting its weakest level since April 2020 at $1,654 early Friday before embarking on a technical correction.

The US Census Bureau monthly release showed that US retail sales rose 0.3% on a monthly basis in August. In addition, the US Department of Labor reported that there were 213,000 initial jobless claims in the week ended September 10, up from 218,000 the previous week. On the negative side, the Philadelphia Fed Manufacturing Index fell to -9.9 in September from 6.2 in August, falling well short of the market’s expectation of 2.8.

On Wednesday, the Federal Reserve will announce its interest rate decision and release the updated summary of projections, known as the dot plot. According to CME Group’s FedWatch tool, markets are currently pricing in a 100 basis point (bps) rate hike with a 20% probability. Market positioning suggests that if the Fed decides to hike interest rates by 75 basis points to a range of 3% to 3.25%, US T-bond yields could fall slightly, causing the dollar to fall loses interest.

In June, the scatter chart showed that the final rate in 2023 was expected to be 3.8%. The new dot chart should show that the policy rate is likely to rise to 4% by the end of the year. If the final rate is now expected to rise towards 4.5% next year and stay there before starting to decline in 2024, the potential negative impact on the dollar of a 75 basis point rate hike is likely to be short-lived.

Market participants are also following the press conference held by FOMC Chairman Jerome Powell closely. If Powell raises concerns about recession risks in 2023, the greenback could find it difficult to gain strength. Any comments on the easing of supply chain pressures or an easing of labor market conditions could weigh on the dollar as well. Still, Powell is likely to reassure markets that they are committed to fighting inflation, noting that they are yet to see convincing signs that inflation has peaked.

The recent dollar rally suggests that we could see buy the rumor, sell the fact action following the Fed’s policy announcements. The Fed is widely expected to remain on an aggressive tightening stance and there is not much room for a hawkish surprise at this point. Markets were already abandoning expectations that the US Federal Reserve could start easing monetary policy in the second half of the year. However, given the relatively healthy state of the US economy, it is not easy for investors to bet against the dollar. Therefore, even if the dollar were to weaken in the near term following the Fed event, it would likely require a significant dovish change in the monetary policy outlook for the currency to steadily depreciate against its main rivals.

On Friday, S&P Global will publish the preliminary US manufacturing and services PMI reports. Market reaction to PMI read should be straightforward as stronger than forecast prints hurt XAU/USD and vice versa.

The Bank of England (BoE) will also announce its interest rate decision on Thursday. The market consensus points to a 50 basis point rate hike, but some experts see a strong chance that the bank could opt for a 75 basis point hike instead. A hawkish BoE result could trigger a strong rally in GBP/USD given the pair’s extremely oversold conditions. The capital outflow from the dollar in this case could help gold gain momentum in an indirect way.

Gold touched the lower boundary of the descending regression channel coming from March on Friday and the Relative Strength Index (RSI) indicator on the daily chart bounced back from 50, suggesting that gold may be in a corrective phase while it rises remains declining.

On the upside, the next hurdle is $1,680 (midpoint of descending channel, former support) ahead of $1,700 (psychological level, static level). A daily close above the latter could attract additional buyers and open the door for an extended rally to the top of the regression channel at $1,720, where the 20-day SMA also resides.

FXStreet Forecast survey points to a mostly bearish bias in the short-term and the 1-week median target is $1,650. The 1-month outlook paints a similar picture with an average target of $1,643. 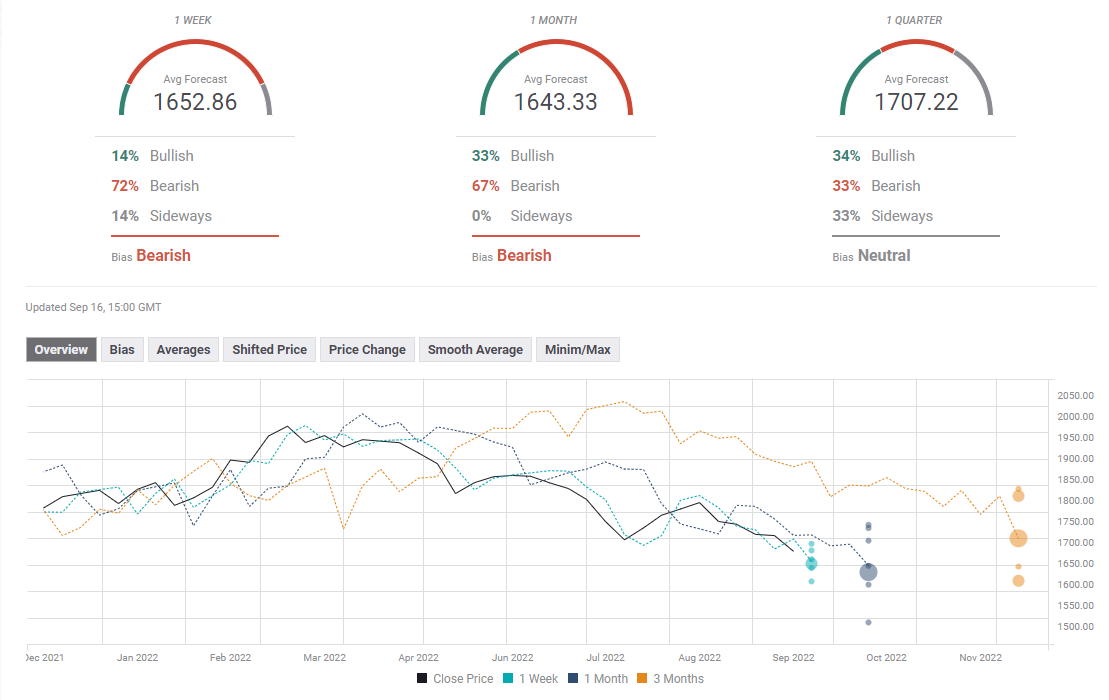