Confidence in Argentina’s economy is dwindling as the government grapples with political infighting, an ever-mounting mountain of domestic debt and inflation hurtling towards 90 percent.

The US dollar has rocketed to new highs on the black market as Argentines, limited to buying $200 a month, rush to moneychangers to dump their rapidly depreciating pesos. Dollars were selling on the streets of Buenos Aires for 337 pesos on Friday, up 15 percent in just one week.

The rapid deterioration in sentiment and the government’s increasing difficulty in funding itself are raising fears of a full-blown economic crisis similar to those that have regularly plagued the South American grain exporter for the last half century.

“The risk of accelerating the pace at which Argentina’s economy is deteriorating is significant,” Citi warned this month.

The gap between the black-market dollar and the artificially controlled official rate has widened to more than 150 percent — a level last seen during Argentina’s 1989-1990 hyperinflation, according to broker Portfolio Personal Inversiones.

Argentina has been largely isolated from international debt markets since its 2020 default. The government funds itself instead through money printing and domestic debt, most of which is inflation-linked and carries ever-higher interest rates.

President Alberto Fernández has ruled out a one-off devaluation. Still, many Argentines and bank economists fear the economy will get much worse before it gets better.

“Dollar sales are crazier than ever,” 28-year-old Adán, who exchanges money illegally in central Buenos Aires and chose not to give his full name, told the Financial Times. “The only thing customers don’t want to hold is pesos. . . Many are asking questions about what will happen next.”

Months of quarrels within the ruling Peronist coalition followed the abrupt resignation of Economy Minister Martín Guzmán on July 2. It heightened concerns about the ability of Fernández’s weak and unpopular government to cope with the rapidly deteriorating situation.

“I decided to make a big purchase that I had put off knowing that if the minister resigned, markets would go nuts,” said Paige Nichols, a 35-year-old marketing consultant, while shopping in Buenos Aires.

Guzmán left the country just three months after negotiating a $44 billion debt restructuring deal with the IMF. But his pledges to curb the budget deficit were staunchly rejected by powerful Vice President Cristina Fernández de Kirchner and her radical allies. Kirchner believes the Peronists should instead spend more to shield voters from rising inflation ahead of the 2023 presidential election.

Despite Guzmán’s early exit, IMF officials believe the fund’s economic goals agreed with Argentina can still be achieved by his successor, Silvina Batakis, if she acts quickly.

But events risk overtaking Batakis, a little-known figure few believe to have the political clout to secure the cuts in energy subsidies and reductions in money printing that eluded her predecessor. “No action will be effective until it is clear that Vice President Cristina and her group will not sabotage Batakis,” the Eurasia political risk group said in a statement.

Inflation, meanwhile, hit 64 percent a year in June and is expected to accelerate to over 90 percent by the end of the year, according to Morgan Stanley.

Despite high global commodity prices, Argentina’s net foreign exchange reserves are just $2.4 billion. This is partly due to expensive energy imports, but the country’s grain exporters are also hoarding their harvest because they fear an impending devaluation instead of sending and paying for it in pesos at the unfavorable official exchange rate.

Argentina’s sovereign debt to private creditors, which was restructured as recently as 2020, is once again trading in distressed territory. The country is expected to enter a brief recession this year, according to a central bank survey, with declines in the second and third quarters.

Ignacio Labaqui, a senior analyst at Medley Global Advisors in Buenos Aires, said economic factors are only part of the problem. “Even though the government has announced a coherent economic plan, Fernández lacks credibility,” he said. The ruling coalition has failed to reassure the public “it’s a question of when they devalue, not if”.

Two pillars of the IMF deal are to reduce the budget deficit over a three-year period and curb central bank money printing to fund it. Buenos Aires agreed to these belt-tightening terms in exchange for a four-and-a-half-year grace period on IMF payments, with full repayment by 2034. 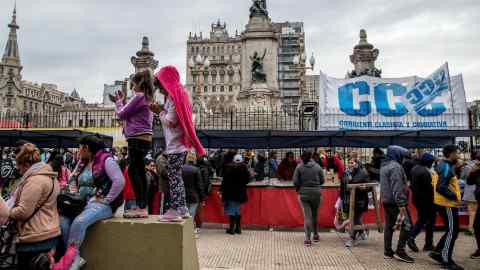 Argentina is limited to printing 765 billion pesos ($5.8 billion) for the full year to fund its deficit. But the central bank has already printed 630 billion pesos this year, more than half of that in the past month and a half.

In a bid to encourage investors to buy Treasury bills, Argentina’s central bank promised investors last week that the bank would protect the investment if prices fell. Analysts said this could prompt the bank to print more pesos to back up the new guarantee.

In September alone, an estimated 900 billion pesos ($6.8 billion) in local currency debt will mature. Confidence in the government’s ability to roll over these loans is fading amid concerns about their solvency and a possible imminent devaluation despite official denials.

Reducing the budget deficit before interest payments from 3 percent of GDP last year to 2.5 percent in 2022, as stipulated in the IMF agreement, also appears difficult to achieve. According to Julian Rojo, an analyst at General Mosconi, a local think tank, energy subsidies, a key reason for the red ink, nearly doubled in the 12 months to June.

Adding to the deteriorating economy is Argentina’s unruly politics ahead of next year’s elections, which the Peronists are likely to lose. “The risk of a state collapse in Argentina is not negligible given the ongoing economic crisis. The government’s ability to complete the current presidential term is worrying,” Labaqui said.

reply to this article:

Argentines have always preferred the dollar to the peso / By Robert Boston, Kingshill, Kent, UK